T-Shirt: I Am Guru

ILL Kid
Guru came up with the name ILL Kid to express the person he would become when he would act up and spaz out. DJ Premier states that Guru would actually warn people and say, “you don’t want me to let the ILL Kid out” before doing so. He referred to himself as ILL Kid on the songs Speak Your Clout (Hard To Earn) and Illest Brother (Daily Operation). A caricature of the ILL Kid (A wacked out, deranged looking figure with exaggerated bow legs, a gun in one hand, and a record in the other) was created and tattooed on Guru’s right shoulder. This caricature can also be seen on the cover of Guru Presents Ill Kid Records, released in 1995 (his first solo album outside of the Jazzmatazz series).

Baldhead Slick
At one point Guru used to rock a fade or have his hair in twist. Once his hairline started to recede he decided to shave it all off. The fresh baldy spawned the name Baldhead Slick. This was around the same time the rap group ONYX (every member of the group rocked bald heads) came to fame and helped make baldheads fashionable. The baldhead became Guru’s signature look. Baldhead Slick was also the name of one of his albums. Guru’s Baldhead Slick & da Click was released in 2001. It was his second solo recording outside his Jazzmatazz series of albums.

G.U.R.U.
Gifted Unlimited Rhymes Universal. God is Universal; he is the Ruler Universal.

THE X LABEL
G.U.R.U Clothing Line – “Preserving his MESSAGE, his MUSIC, his LEGACY.” Guru’s prolific lyrics and profound voice has left a permanent mark in hip hop history. His purpose was clear and driven from the heart. This clothing line seeks to uphold the message and continue the mission of a legend.The X Label.

There are no reviews yet.

Be the first to review “T-Shirt: I Am Guru” Cancel reply 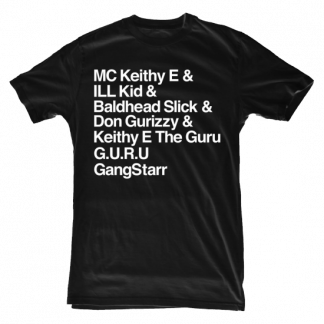