Gang Starr have dropped the video for the “Founders Remix” of their track “Glowing Mics,” which previously appeared on the instrumental version of the legendary rap group’s 2020 LP One of the Best Yet.

That album — Gang Starr’s first since 2003’s The Ownerz — served as DJ Premier’s tribute to his late duo partner Guru, who died in 2010. For the “Founders Remix,” Premier reenlisted rapper Big Shug, one of the MCs who frequently collaborated with the duo as part of their Gang Starr Foundation.

“Simply hearing Guru doing the ‘Mr. Gang Starr’ hook on the original version, the fact that Guru and Shug are the founders of the name (Gang Starr) and the group,” Premier said in a statement. “It made total sense for Shug to lay a verse about how the legacy is still preserved through us.”

Like the video for One of the Best Yet single “Bad Name,” Guru’s son Keith “KC” Casim steps in for his late father in the new visual.

“I didn’t originally plan on doing a video for ‘Glowing Mics (Founders Remix).’ I had a conversation with KC about the remix featuring a Big Shug verse and he suggested that he and Shug’s son (Trumayne) pay homage to their fathers with their respective roles; and he convinced me to get a video done” DJ Premier said of the video, which he also co-directed.

“This video was created because I loved KC’s idea for the visual and once the decision was made, I visualized Spice Adams picking up where we left off with the ‘Bad Name’ video and when I called him he was totally with it.”

“Glowing Mics (Founders Remix)” is available to stream and purchase Friday on all streaming services. The instrumental version of One of the Best Yet (with the original “Glowing Mics”) is out now. 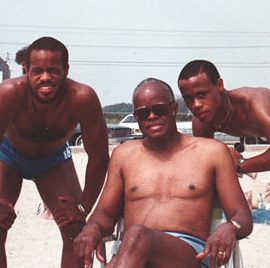